Bedroom Ideas with Mid-Century Style – The modern mid-century design style refers to the design style of the mid-20th century, or around the 1930s to the 1970s. This design style is known to have a simple character and integrated with nature. Buildings that apply a modern mid-century style generally have flat roofs, large glass windows, sliding glass doors, and clear geometric lines.

The application of modern mid-century design style can certainly be applied to all areas of the house, including bedrooms. For you who like flexible color games, solid material and texture mixes, and organic and geometric patterns, the following inspiration will be very interesting for you to apply in order to get a bedroom with a modern mid-century style. The first modern mid-century bedroom idea will give the impression of comfort once you enter it. This bedroom is designed so simple. Large glass windows are the main focus which gives a direct view to the outside of the house. Rooms wrapped in soft colors like olive green and mustard are factors that exude a sense of comfort. Not much decoration is needed, considering the view outside the window is very charming. 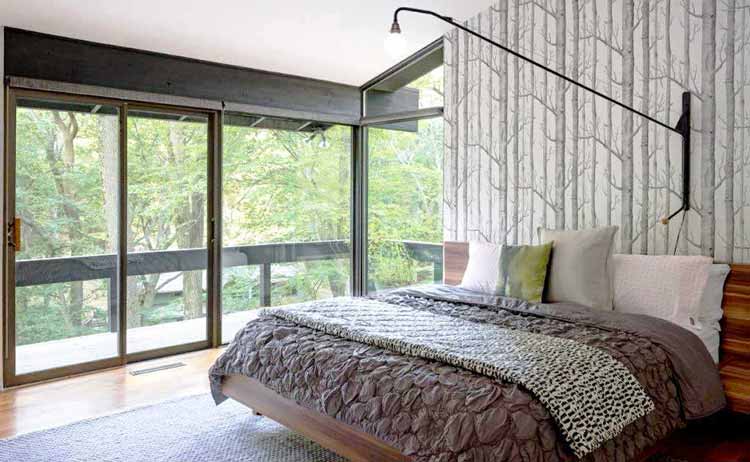 The next modern mid-century bedroom design looks very much at one with nature. Try the natural texture presented authentically through wallpaper with dark colored tree motifs, and wrinkles on blankets that are also dark. The elements of the room are seen interacting with the trees which are just outside the bedroom window.

3. Bedroom ideas : The Domination of Comfortable and Enchanting Land Colors

There are tips so that the dominance of neutral earthy tone colors in modern mid-century rooms is far from boring. The uniform design and shape of the supporting leg in the form of tapered leg on the bed and small cupboard gives the impression of lightness. Plus, the use of white fur rugs gives a texture to the comfortable impression of the room. Then, the brick pattern on the bedroom wall becomes a backdrop that enhances the look of the room.

4. Bedroom ideas : Maximize the Use of Natural Materials 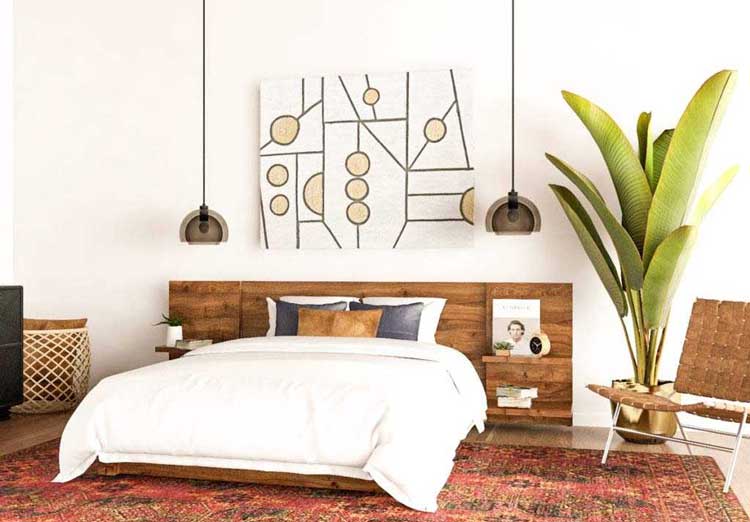 One element that is often used in modern mid-century interiors is natural materials, especially wood. Feel free to incorporate this element into every aspect of the room, like the one in this bedroom. Hardwood floors, beds, and headboards are made of real wood which gives a warm impression to the bedroom. A chair on the side of the bed has both functional and decorative aspects at the same time. Woven model and the color of the seats are similar to the original wood color on the headboard.

Get : 16 Best Plugins for SketchUp Pro All Version

Don’t block your taste buds to add another touch of style to a modern mid-century design. For example, retro style. You can do this by adding furniture or certain elements that have retro characteristics. This one bedroom has all the characteristics of a modern mid-century style such as wooden elements for almost all parts of the room, and of course a large glass window. The retro touch itself comes from the egg chair which is an icon from the retro era, plus a row of artwork with a metal frame.

All you need to remember, the stage that plays an important role is when choosing furniture. Make sure you have precisely determined furniture that supports the modern mid century style. In fact, just one touch of furniture can have a significant impact to perfect the look of a modern mid century. Contrasting couches, geometric motif rugs, or chandelier with unique shapes, will dramatically strengthen the texture. Good luck!

So the information we can convey, hopefully useful about 6 Best Bedroom Ideas with Mid-Century Style above

How to determine Scale object size in SketchUp